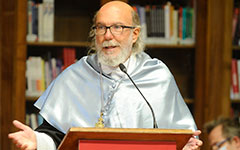 Toni Segarra is probably the most important advertising copywriter in our country, and undoubtedly one of the most prominent in the world. He loves words -he graduated in Hispanic Philology- and has always shown a natural ability to captivate with multimedia messages. Founder of dazzling agencies, tireless winner of awards (39 Lions at the Cannes Festival, including an almost unassailable Grand Prix, 100 suns at the San Sebastian Festival…) and jury for numerous awards. His merits in the world of advertising are countless: best copywriter of the century according to Ads magazine, one of the 100 Top Creative Minds in Shots magazine, best copywriter of the decade by El Publicista magazine, National Communication Award of the Generalitat de Catalunya... The industry to which he belongs admires him, and consumers remember his unforgettable works such as that "Hand" that caressed the air from a BMW. 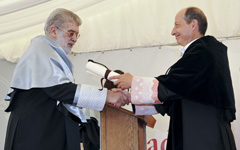 Doctor José Manuel Lara Bosch. José Manuel Lara Bosch is president of Grupo Planeta and Antena 3 since the death of his father in 2003, José Manuel Lara Hernández, founder of this business giant of the communication sector that today ranks first among companies of communication that operate in Spain, France and Latin America.
This entrepreneur was born in Barcelona on March 8, 1946 and studied the Bachelor's Degree in Economic Sciences at the University of Barcelona. In addition, he has an ESADE Master's degree. He is linked to the family business, which was created in 1949, since 1963 occupying different positions of responsibility.
He is a member of the board of directors of the Family Business Institute and of the board of directors of Banco Sabadell Atlántico and Grupo Zed.
The School of Communication and Arts of the Antonio de Nebrija University proposed him as a possible Doctor Honoris Causa for his outstanding role in the social and communicative development of our country and for the importance that Grupo Planeta grants to education. 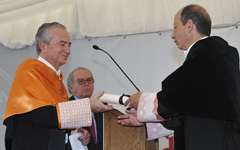 Doctor José María Fernández Sousa-Faro. José María Fernández Sousa-Faro was born in Madrid in 1945. He has a Bachelor's degree in Chemistry and a PhD in Biochemistry from the Complutense University of Madrid, an institution in which he taught higher education in various subjects between 1968 and 1979. He was also a professor at the University of Santiago de Compostela as Associate Professor of Biochemistry.
Since 1985 he has been the president of the Zeltia Group. A year later he created PharmaMar, a chemical company specializing in the discovery of drugs of marine origin, of which he is also president. In addition, in 1990 he founded Genómica, a biotechnology firm dedicated to the analysis of DNA with diagnostic objectives.
José María Fernández Sousa-Faro has nearly 100 scientific publications and patents.
He was proposed at the request of the School of Social Sciences as Doctor Honoris Causa of the Antonio de Nebrija University for his leadership and innovation capacity and for his initiative, originality and effectiveness at the front of Grupo Zeltia and PharmaMar. 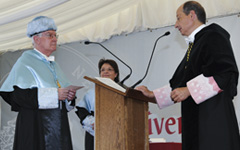 Doctor Víctor García de la Concha. Víctor García de la Concha was born on January 2, 1934 in Villaviciosa, Asturias. He graduated in Philology at the University of Oviedo and in Theology at the Gregorian University in Rome. He worked at the universities of Valladolid, Murcia and Zaragoza until he obtained the Professorship in Spanish Literature at the University of Salamanca, where he directed international courses.
In 1992 he joined the Royal Spanish Academy as a full member occupying the 'c' chair. In 1993 he was appointed secretary and in 1998 director. He held this position until 2010, when he left it for having completed his third term, the third having been granted with an extraordinary nature as the ordinances indicate a maximum of two terms.
In 2010, King Juan Carlos named him Knight of the Order of the Golden Fleece.
Víctor García de la Concha was the candidate proposed by the School of Arts and Letters, which valued his brilliant work in the direction of the Royal Spanish Academy and the dissemination of culture and linguistics of our country. 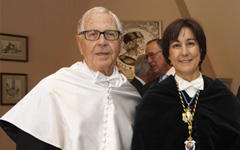 Doctor Martín Chirino. Martín Chirino was born in Las Palmas de Gran Canaria in 1925. At the age of 23, Chirino traveled to Madrid to study at the School of Fine Arts of San Fernando, focusing on iron works. In Italy he studied the classics, completing his training at the School of Fine Arts in London. After his return to the Canary Islands he made the series "Reinas Negras" (Black Queens) with influence of African art and surrealism.
Since 1967, the presence of Chirino in the USA is frequent and periodic. Since the seventies, he will carry out monumental projects inspired by helical forms, continuing his research on Afro-Canarian values and, later, from constructivist formulations, being the representative of international prestige of Spanish abstract sculpture.
From 1983 to 1990 he was president of the Circle of Fine Arts in Madrid, and from 1989 to 2002 he was director of the Atlantic Center for Modern Art in Las Palmas de Gran Canaria. He has been awarded, among others, with the International Sculpture Prize of the Budapest Biennial, the National Prize for Plastic Arts, the Canary Islands Prize for Plastic Arts, the Gold Medal for Fine Arts, the National Sculpture Award of the CEOE, the Medal of Honor of the Circle of Fine Arts of Madrid and the 2003 Plastic Arts Prize of the Community of Madrid. In 2004, the Real Casa de la Moneda Foundation awarded him the Tomás Francisco Prieto Prize for medals. With this motive, he has made the medal entitled "Espiral del viento, elogio a la Música" (Wind spiral, praise to Music) for the Royal Mint. He is Doctor Honoris Causa of the University of Las Palmas de Gran Canarias (2008). 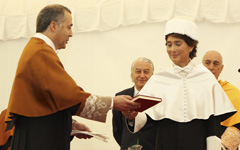 Doctor Paloma O'Shea. She studied piano at the Bilbao Conservatory and completed her musical training in France. Her professional activity began in 1972. To help young musicians, she founded a Piano Competition in Santander, which soon acquired great international prestige.
The infrastructural deficiencies that the Contest had highlighted, took her shortly after to act in the field of music education, creating, in turn, the Reina Sofia School of Music, the Albéniz Foundation, the Albéniz Archive and Documentation Center, the Yehudi Menuhin Prize for the Integration of Arts and Education, the Music and Academia Encounter, the International Chamber Music Institute of Madrid and the Classicalplanet.com portal, which gives the above a technological and, therefore, universal dimension.
In recognition of the place of national and international reference that her project occupies, Paloma O'Shea has been awarded with the Lazo de la Orden de Isabel la Católica, the Cristóbal Colón Order of the Dominican Republic, the Legion of Honor of the French Government, the Picasso Medal of UNESCO, the Honor of the Royal Academy of Fine Arts of San Fernando in Madrid, the Montblanc Culture Awards and the Community of Madrid, the Gold Medal of Merit of Fine Arts, the Spanish Institute of Fine Arts New York, and that of the City Hall of Madrid. She is an "Honorary Fellow" of the Royal Academy of Music of London and Adoptive Daughter of Santander and Cantabria. In 2008, His Majesty the King granted her the title of Marquise de O'Shea.