Entrepreneurship: strategies to improve the competitiveness and resilience of the tourism sector.
Fernando Valdés, Secretary of State for Tourism in the School Week 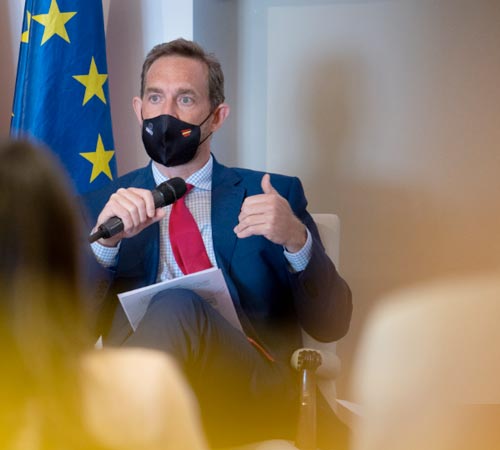 Student profile: All applicants who meet the requirements imposed by current legislation, with an Associate's/Bachelor's or Undergraduate degree, who are interested in acquiring specialized training in the management of tourism companies and destinations or in research in the tourism sector, may access the Master's Program in Tourism Companies and Destination.
Therefore, graduates with an Associate's, Bachelor's or Undergraduate degree in the field of economics, business, specifically those from the Bachelor's Degree in Tourism, Economics, Business Administration and Management, and degrees with competences related to those listed, may access the Master's Degree in Tourism Companies and Destinations.
The student can study either in Spanish or English, having to choose one of the two languages to follow the curriculum.
Students who access the University to pursue their studies in the distance learning modality will have the same mechanisms for prior information as those who do so in the class attendance modality (website and brochures, among others). The Department of Promotion and Admissions is responsible for providing personalized academic information to those who request it, following up and facilitating collaboration in the different phases of prior information and access to the University.
Students taking this modality require a more complete information process, as students must know precisely what is the teaching methodology used, the teaching-learning method, the available media, documentation, resources, software, etc. However, detailed information on the methodology and activities to be carried out throughout the curriculum is included for each distance learning degree on the University's website.
For this, during the degree's starting week, through the virtual campus, the student will be provided a technical guide with information related to resources, the use of the campus, and general information on the degree. An academic guide will also be provided for each of the subjects.

Duration: 9 months. From October to July

The Master's Degree in Tourism Companies and Destinations, with the Own Degree of Expert Nebrija in Innovation and Tourist Intelligence, encourages students in entrepreneurship and business innovation in this sector, which is the engine of the Spanish economy. The program complements the Bachelor's Degree in Tourism, specializing the student in business management, by acquiring the knowledge and skills necessary to develop a tourism product or company, adapting it to new environments, digital opportunities and current global consumer needs.

The tourism sector is changing, it is segmented but at the same time globalized and technological, so it requires expert professionals with a highly qualified profile, who can respond immediately to these new challenges. The curriculum includes two itineraries: one in research, for those who want to continue their studies with the PhD in Tourism, which is also taught at Nebrija University; or the professional itinerary, for those who seek to start a business in the sector.

One of the fundamental pillars of Spanish economy is tourism. The importance of the sector is reflected in its contribution to the GDP. Companies and institutions dedicated to tourism are always in constant evolution, marked by technological advances. Therefore, they demand more and more specialized professionals with a series of skills and abilities up to date with the latest trends.

The Master's Degree in Tourism Companies and Destinations Management responds to this business need. The curriculum is designed with an international perspective, promoting the employability of its graduates in all parts of world. In addition, the program has a large technological presence in its contents, preparing students to respond to the future challenges faced by tourism companies and institutions.

The program has two differentiated itineraries to train its students according to the profile that most interests them: research or professional. The research itinerary, in addition to granting access to the Doctorate in Tourism, gives the student the competences, tools and skills necessary to successfully carry out the research task.

For its part, the professional itinerary is focused on students with a more international and business profile. Encouraging the employability of its graduates is one of the University's maxims, an objective that more than meets this program aimed at entrepreneurship and technological innovation.

Nebrija University organizes several conferences and workshops on the tourism sector during the academic year, with visits and presentations by the best professionals in the sector. In addition, students will make technical visits to hotels, agencies and tourist destinations, where they will learn first-hand about the professional activity.

The UNWTO Affiliate Members platform is an interactive tourism platform at the international level that offers the opportunity to create networks with common objectives and to be a space for the creation of new tourism products for the institutions and States participating in the program.

The Master's in Tourism Destinations and Companies program has the support of an Advisory Council made up of relevant institutions and organizations in the tourism industry. The collaboration of the Advisory Council in research projects, specific academic programs, advice on programs, among others, fosters business and institutional synergies with the academic field.

Technical visits to the best hotels, agencies and tourist destinations

You will study in an international campus, in the center of Madrid, with over 70 different nationalities.

The program has a high load of contents aimed at promoting the entrepreneurship of its students and providing them with the necessary skills and tools to do so.

With the support of the best

The students of the Master's degree will be able to carry out their internships in the best companies and institutions of the sector, such as Globalia, Tripadvisor and NH Hotels Group.

Nebrija's Expert Degree in Tourism Innovation and Intelligence is specialized education in tourism innovation, technology and intelligence, which seeks to train future professionals in the sector on current issues, so that they can adapt to a dynamic environment and successfully face structural changes issues that arise, both from the pandemic crisis and from new trends in tourism business models.
For this, Nebrija University has the support of the most important companies and institutions in matters of tourism innovation and intelligence, which favors learning and business and institutional synergies with students.

Hand in hand with the best companies in the sector

The most influential leaders in the tourism sector participate in Masterclass, conferences, seminars, workshops, round tables, etc. Classes are taught by professionals from the sector who hold senior management positions in tourism, startups creators, and academics who are experts in tourism innovation and intelligence..

All our degrees and curricula have been prepared in accordance with the new guidelines set by current legislation, having already been verified by the National Agency for Quality Assessment.
The student must take 60 credits

The teaching-learning methodology follows the case method. Continuous evaluation and personalized attention are two of the fundamental characteristics of this Master's degree. In the online mode, the Blackboard learning platform is used. The professors are active professionals and doctors, with small groups, which guarantees the quality of the education received.

How to submit documentation necessary for admission.

The student must provide the originals or certified copies of the submitted documentation, within a period established by the University, in order to formalize his/her enrollment. Any inaccuracy, falsity or omission of information, statement or document provided by the student in the admission period will entail the impossibility of continuing to exercise the right from the moment the University has proof of these events, and proceed to cancel the application for admission submitted and the place awarded, notwithstanding any criminal, civil or administrative responsibilities that may arise.

In order to access the official master's degrees, it is necessary to submit the following documentation:

In the event that the studies granting access to the pre-registration of the Master's degree are completed in a Foreign Higher Education institution, both the diploma and the academic record (grades) must be official and issued by the competent authorities, in accordance with the legal system of the country of origin.

If the number of applicants exceeds the number of places offered, the student's academic record (average grade) will be taken as an admission criterion.

Once the places are full, if there are more students interested in accessing the program, they will be put on the waiting list for any possible vacancies that may arise before the start of the academic year, applying the admission and selection criteria detailed in point 4 for the rest of applicants.

Students must take the following tests, which are part of the admission process.

In order to know the students' real level of knowledge of the foreign language, the Institute of Modern Languages conducts a language placement test. The placement tests consist of a written exam with multiple-choice questions, oral and written comprehension, and use of the language. They are taken in person or online.

It will not be necessary for the candidate to take the language placement test if he/she submits a certificate that accredits his/her minimum knowledge of the Spanish language is at a B2 level of the CEFR. The level accreditation will be validated through the official diplomas admitted by the table of certificates accepted by ACLES and/or Instituto Cervantes. Valid for one year.

Likewise, if the student wants to take the degree in English, he/she must prove at least having a B2 level of the CEFR or take the aforementioned test.

Carried out by the Director of the Program or by University advisers, this interview is aimed at verifying the candidate's suitability and his/her profile in relation to the degree. This is done to determine if the candidate has sufficient motivation, training and knowledge, abilities, aptitudes, communication skills, extracurricular activities and future interests necessary to be admitted as a student in the Nebrija University postgraduate programs.

SThe average grade of the academic record of the students interested in accessing the Master's degree in Tourism Business and Destinations will be taken into account.

The weighting of the criteria used is as follows:

Once the student has been admitted, they will proceed to enroll, which consists of the following phases:

Place reservation
Candidates must reserve their place. This economic pre-enrollment guarantees the candidate's place at the University. These annual enrollment fees will not be returned except for students who are conditionally admitted, or do not fulfill the legal requirements for admission, or with a justifiable medical situation.

Enrollment
Pre-enrolled candidates who wish to formalize their academic enrollment at the University must follow these steps:

In addition, through this postgraduate training, students acquire skills to:

The Master is a program designed with the support of an Advisory Council that incorporates the main organizations in the sector, such as Telefónica, Iberia and the Instituto Tecnológico Hotelero, among others. In addition to having the support of institutions such as the World Tourism Organization (UNWTO) and SEGITTUR. On the other hand, the Department of Tourism actively participates in the Spanish Tourism Board and has a Research Group on Tourism Intelligence, which supports the knowledge of the real situation of the sector.

News in Master's Degree in Tourism Companies and Destinations

The benefit of technology for Tourism

Interview with Natalia Bayona, Director of Innovation, Education and Investments at World Tourism Organization (UNWTO), where she analyzes the importance of the application of technological solutions in tourism in order to help reach more people, improve the customer experience and continue to be the largest employer of youth and women in the world. She also highlights the role of education in empowering young people to be actors of change towards a more sustainable, more modern and more innovative system.

Collaborative Economy was the central theme at the Tourism Week held at the Nebrija University's Madrid-Princesa Campus, in which experts from the sector took part.