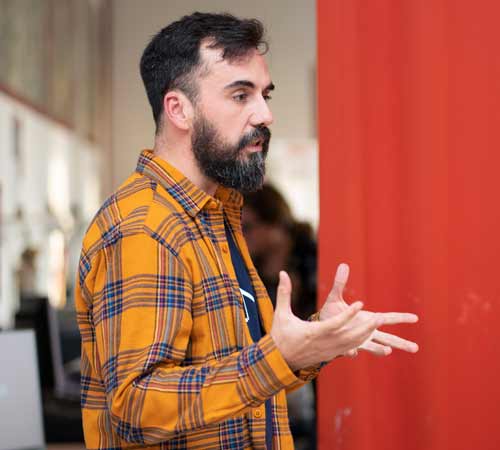 Student profile:The access profile for the Master's Degree in Industrial Design, with Product Management specialty or Habitat specialty, is that of a person who combines creativity with technology and engineering. They must be innovative people, be interested in research and be highly creative.

Graduate profile:The Master's Degree in Industrial Design is structured in two Areas of Knowledge: Habitat and Product Management. The first of them is more focused on objects and equipment for the domestic space or the specific furniture for installations, collectivities and urban elements. On the other hand, the second specialty places the designer as knowledgeable and actor of the functions, training him/her to participate actively in the organization of the company. Develop planning, forecasting and production abilities, or marketing a product or service linking your work to all the stages.

Languages: This Master's Degree is taught in Spanish

Design helps identify and understand the needs of users and market demand, providing new solutions in terms of usability, functionality and esthetics. The program fosters the ability to think globally in order to detect market needs, learn about trends and bring innovative products to reality.

With this Master's degree in Industrial Design from Nebrija University, the student obtains the necessary skills and knowledge to develop his/her professional career in furniture and habitat product design, trend studies, design consulting firms, and product design and development.

Design is a much more important activity than most people believe, because it is about making life more comfortable, easy and simple for users, providing new solutions to society's needs, through the design of products that are innovative and accessible to all.

With this official Master's Degree in Industrial Design from Nebrija University, the student acquires the necessary skills and abilities to find innovative solutions to the market's needs, selecting the most appropriate material and manufacturing process, addressing issues such as sustainability and environmental impact of production.

The implementation of Postgraduate Programs in the "Bologna Process" provides students with all quality guarantees regarding content, faculty and facilities, through the supervision and approval by the University Authorities of these programs.

This Postgraduate Program has a strongly innovative character, with truly avant-garde subjects that address aspects and emerging areas of maximum interest, promoting institutional relationships that provide students with the best and most advanced opportunities for professional development in the design environment. This program is the only master's degree in Industrial Design that includes a specialization in Habitat.

The teaching methodology is oriented towards projects, with an intense participation and research work by the students, guaranteeing their maximum involvement and motivation in the proposed design problems. The development of technical, creative and communication skills is the final objective of this master's degree, until the integral product manager is shaped.

Technical Engineer in Industrial Design. Class of 2005
Creator and designer in Droog (Holland) "My time in the Nebrija has influenced my way of facing professional challenges that come my way every day, which undoubtedly was contributed by the dedication of the professors so that their subjects were really useful and not just a text to memorize. There are a lot of details that made my University years really special. After finishing the degree, I decided to create a web platform from which to show the world my work, exhibitions, projects and research."

You can choose between two specialties, a class attendance one (Habitat), new in Spain, and another in the blended modality (Product Management), compatible with one's personal and professional life.

With the best professionals

Know the current situation of product design, through the designers participating in the course from the most relevant agencies and studios in the sector.

The subjects are set out as real departments of a design and development company; this will make the student have a more realistic view of the market and greater employability opportunities.

100% practical program with the best and most complete facilities.

It is a unique program due to its conception and for its contents, specialization alternatives and institutional relations that provide the participants with the best and most advanced professional development opportunities in the design field.
The student must take 60 credits

Related to objectives 7 and 8: MASTER COMMON AND SPECIAL TECHNOLOGIES

Specific competences Of the common subjects for the four specialty itineraries

New materials and applications in design

Analysis through the finite element method

Technology and trends in furniture design

The Product management Specialty is taken in Blended Modality

According to what is established in Article 16 of RD 1393/2007, modified by RD 861/2010, students who meet any of the following conditions will be able to access these studies:

Form of submitting the necessary documentation for admission.

The student must provide the originals or certified copies of the documentation presented, within a period established by the University, in order to formalize his/her enrollment. Any inaccuracy, falsity or omission of information, statement or document provided by the student in the admission period will determine the impossibility of continuing to exercise the right from the moment the University has proof of such facts, proceeding to the cancellation of the application for admission submitted and the place awarded, notwithstanding the criminal, civil or administrative responsibilities that may arise.

In order to access the official university master's degrees, it is necessary to submit the following documentation:

In the event that the studies granting access to the pre-registration of the Master's degree are completed in a Foreign Higher Education institution, both the diploma and the academic record (grades) must be official and issued by the competent authorities, in accordance with the legal system of the country of origin. In addition, they will have to fulfill the requirements that are indicated in detail in the "Access and admission procedure for Master_PO12" of the Teaching Organization Plan implemented by the University.

In addition to the evaluation of the academic merits provided by the candidate, students must take the following tests, which are part of the admission process.

In order to assess the students' real level of knowledge of the foreign language, the Institute of Modern Languages will design a language placement test. The level tests consist of a written exam with multiple-choice questions, oral and written comprehension, and use of the language, and last 60 minutes. They are taken in-person or online. Depending on the results of this test, the student will be placed at the corresponding level. It will not be necessary for the candidate to take the language placement test if they meet any of the following requirements:

This interview, which is carried out by the faculty or university advisors, is aimed at verifying the suitability of the candidate and his/her profile in relation to the degree. It is a matter of determining if the candidate has sufficient motivation, training and knowledge, abilities, aptitudes, communication skills, extracurricular activities and future interests necessary to be admitted as a student in the postgraduate degrees of Nebrija University.

The graduate can carry out his work activity in multiple sectors and areas of specialty and activity of the industrial fabric: