Security and Risk and Conflict Analysis 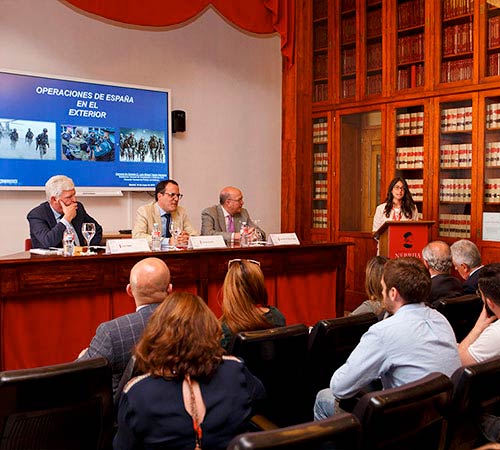 Doctorate in Security and Risk and Conflict Analysis

The Doctorate program in Security and Risk and Conflict Analysis arises in a scientific, economic and social context as a consequence of the need to provide an adequate multidimensional response to some of the most relevant problems of contemporary societies, which is security, in its many facets, as well as the analysis of the risks that can generate conflicts, and of the conflicts themselves, both national and international.

The criteria to access the PhD program have been detailed in the previous section, and are those established by the law for this purpose. Therefore, any candidate who meets these criteria would have legal access to the program.

A second admissible profile will be that of people who, complying with the general access requirements set forth in the current legislation for doctoral studies in Spain and having carried out the studies indicated in the previous paragraph or similar to them but without having completed a master's degree whose structure contains at least 16 ECTS credits in subjects related to research, including the Final Research Project, is willing to carry out the appropriate training supplements. In this case, if admitted, the candidate would have to complete the necessary training supplements in accordance with what is established by the Academic Committee of the Doctoral Program. To this end, the candidate will be offered training supplements in research methodology in Security and Analysis of Risk and Conflict Management according to their lack of training assessed by the Academic Committee of the Doctorate program.

Likewise, in order to access the program, it is required that students accredit the equivalent to a B2 level of the common European framework of reference of languages (MCERL). And a B2 level also in Spanish in the case of international PhD students.

In general, to access an official doctoral program it will be necessary to have an official Spanish Bachelor's degree, or equivalent, and a Master's degree. Those who are in any of the following cases may also access:

The following scale is established for access to these doctoral programs:

* In the case of non-European diplomas: "apostille" in documents issued in countries that have signed the Hague Convention or legalization through diplomatic channels, in other cases
**If the documentation has not been issued in Spanish, it must be accompanied by the corresponding official sworn translation

Send the completed admission application and claims to [email protected]

Those candidates admitted to the program but who do not have sufficient specific training in research methodology in Security and Risk and Conflict Analysis must carry out additional training actions to their previous training.

Specifically, they will have to take a minimum of 6 ECTS credits, depending on the assessment of the candidate's education by the Academic Committee of the Doctoral program. Given their complementary nature, these credits must be taken by students during the first year of the doctorate program.

The criteria and procedures that will be applied to assess whether or not candidates have sufficient specific training in Research Methodology will be:

The subject proposed as a complement to training is as follows:

Below is a brief description of the contents, competences, training activities and evaluation systems of the subjects.

Procedures and assignment of thesis tutor and director Fees

In each academic year, until the reading of the thesis, the student must renew the registration within the established period.

The Doctoral Commission can also be asked annually for partial exemptions from the doctoral fees for doctoral students who actively collaborate in Nebrija research groups, among others.

Security and risk and conflict analysis

The distribution of activities in full-time dedication has a decreasing logic and is concentrated in three years, while in the case of part-time studies it is distributed over five years of training.

Specific educational activities for this Doctorate

At least one publication with the following indexing: articles in SCOPUS scientific journals or book chapters, and books in first SPI positions.

Caterina La Barbera I am PhD in Human Rights from the University of Palermo, Italy (2008).
I am Professor and a “Ramón y Cajal” research fellow at the Department of Law of Nebrija University in Madrid. I have teaching and research experience in Spanish and foreign institutions, including the University of Palermo, University of California-Berkeley, Center for Human and Social Sciences of CSIC, Center for Political and Constitutional Studies of Madrid, UNED, Complutense University and University Carlos III of Madrid. My research is located within critical studies of law and public policies . It covers human rights at the intersection between gender equality and cultural diversity and explores the material and discursive conflicts that are articulated around these two fundamental axes. I am the author of the monograph “Multicentered Feminism” (Compostampa 2009) and edited the volumes “Identity and Migration in Europe” (Springer 2015),“Igualdad de género y no discriminación en España ” (CEPC 2016), “Challenging the Borders of Justice in the Age of Migrations” (Springer 2019). I am also author of numerous publications in indexed journals and chapters of books (in English, Spanish and Italian) addressing issues related to equality and non-discrimination policies, immigration and integration policies, identity formation, diversity among women, autonomy vs cultural practices.
I have been PI of 4 competitive research projects on gender, migration and human rights, and participated in numerous national and international R&D as a team member. I am currently part of the Berkeley Comparative Equality & Anti-Discrimination Law Study Group and Gender Equality Policy in Practice. I regularly serve as a peer reviewer for Spanish and international indexed journals.

Santiago Budria Rodriguez I have a BA degree in Economics by Universidad Pompeu Fabra (1996) and a PhD in Quantitative Economics by the University of Alicante (2003) under the QED doctoral program of the Department of Economic Analysis. I worked as Assistant Professor in Alicante’s Department from 1997 to 2001, and at the Department of Statistics at Carlos III University in 2001. In 2002 I earned a 2-years position at the University of Madeira as a predoctoral research fellow in a long-duration competitive project (code: HPSE-CT-2002-00108) financed under the 7th Framework Programme of the European Commission. After the project, I was hired as an Associate Professor and became Scientific Coordinator of the CEEAplA, a Portuguese research centre regarded as “Excellent” and financed by the Portuguese FCT (2004-2013). In 2013 I returned to Spain and worked as a researcher and assistant professor at different institutions, including the Bank of Spain, U. Pontificia Comillas and IE University. Currently, I serve as Full Professor in Economics at the Department of Business Administration at U. Nebrija. I am a microeconometrician mostly interested in labour, education, inequality and well-being. At the present time I am pursuing work investigating the role of personality traits, economic status and economic insecurity in determining well-being levels in modern societies. I have published 23 JCR papers and 3 book chapters. I have one certified sexenio (2007-2012) and another “alive” sexenio (2013-2018) that will be requested in December this year.

Siraj Shaikh Siraj Ahmed Shaikh is Professor of Systems Security at the Centre for Transport and Mobility Research at Coventry University, where he leads the Cyber Security Group involved in automotive and transport security.
From February 2015 till May 2016, he was seconded to the Knowledge Transfer Network (KTN), which is the innovation network in Britain. He served as cyber security lead for the KTN coordinating activities across academia, industry and national policy. From March 2015 till March 2016, he was also seconded to HORIBA MIRA, as part of the Royal Academy of Engineering’s industrial secondment scheme.
In 2016, Siraj co-founded CyberOwl, which is a VC-backed commercial venture involved in developing early warning system for cyber threats, cyber-physical platform health and prognostics. CyberOwl is currently part of the UK’s 1st GCHQ Cyber Accelerator.
Siraj is currently involved in the EPSRC-Funded project “ECSEPA”, jointly with Cardiff University, investigating evidence-based policy-making for cyber security, working with policy partners including UK’s GCHQ/NCSC and FCO. Siraj has been involved in research, development and evaluation of large-scale distributed secure systems for over seventeen years. His doctoral and post-doctoral research involved design and verification of security and safety-critical systems. He was recently involved in an EPSRC-Funded research project investigating collusion attacks on smart phone platforms. Led by City University (UK), it also involved Swansea University (UK) and Intel Security as an industrial partner.
From 2013 to 2014, he investigated safety data modelling for the UK Rail Industry, funded by the RSSB. From 2011 to 2013, he was involved with the development of an intelligent control and guidance system for unmanned logistics vehicles for unmanned distribution capability. This work was funded by the Ministry of Defence (MoD) of UK over two phased projects, and jointly led by Siraj and Prof. Dobrila Petrovic.
From 2010 to 2012, he worked with the transport and logistics sector in the UK investigating efficient and reliable supply chain networks for consignment delivery. This initiative was led by Ricardo and funded by Technology Strategy Board (TSB) and EPSRC.
In 2011, he participated in the Pairing Scheme by The Royal Society of UK, as part of which he worked with Civil Servants at the Foreign and Commonwealth Office (FCO). In 2010, he served as a EPSRC-Funded Policy Fellow to the Department of Environment, Food and Rural Affairs (Defra) of Her Majesty’s Government (HMG), advising on secure storage and transmission of data from field-based rapid diagnostics devices.
From 2007 to 2009, he worked as a Research Fellow at Cranfield University, at the Defence Academy of the United Kingdom, and from 2006 to 2007 as a Postdoctoral Research Fellow at the International Institute of Software Technology of the United Nations University, Macau SAR China. Prior to academia he worked in the industry developing smart-card based access control systems for use by HMG.
He is the Vice-Chair for the International Federation for Information Processing (IFIP) Technical Committee 6 on Communication Systems, and also a member of the Developing Countries Support Committee (DCSC) of IFIP.
His paper titled “A Deployment Value Model for Intrusion Detection Sensors” won the Best Paper Award at the 3rd International Conference on Information Security and Assurance (ISA 2009), held in Seoul, Korea in 2009.
He has over eighty peer-reviewed research publications and has successfully supervised three Doctoral and two MRes students to completion. He is a Chartered Fellow of BCS and also Chartered Scientist (CSci).
He has served on the Program Committee (PC) for several conferences and has been the PC Co-chair for the 3rd, 4th, 6th and 8th International Workshop on Foundations and Techniques for Open Source Software Certification (OpenCert) in 2009, 2010, 2012 and 2014 respectively. He has co-edited a special issue of the journal ‘Science of Computing Programming’ for selected contributions from the OpenCert workshops (2014).

Branislav Radeljic Dr Branislav Radeljic is a reader in international relations within the Cass School of Education and Communities, University of East London. His main research interests focus on the study of European Union, East European and Western Balkan politics. In addition to these, Branislav is interested in, and has written about, the presence of Islam in the EU and its impact on future EU policy-making. He has held visiting fellowships at the London School of Economics and Political Science, University of California at Berkeley, University of Illinois at Urbana-Champaign, University of Michigan and University of Pittsburgh. Branislav has presented and discussed his ideas at numerous conferences and public lectures across Europe, America and Asia. Outside academia, he conducts research and provides consultancy services within his area of expertise.