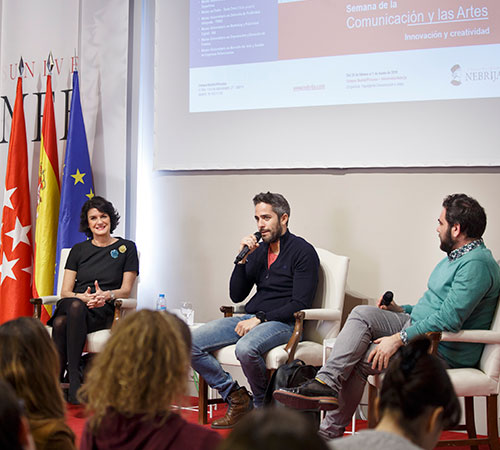 Student profile:The access profile for the degree focuses on students who hold an official Spanish university degree or another issued by an institution of higher education in the European Higher Education Area, which grants access to Master's degree programs in the country issuing the degree, corresponding to the Bachelor's Degrees of the branch of Communication, Social and Legal Sciences, such as: Advertising and Public Relations, Audiovisual Communication, Journalism, Corporate Communication, Protocol and Events, and Tourism.

Graduate profile: The degree aims to train future professionals in this sector in the skills and advanced knowledge necessary to meet the requirements of today's digital society, allowing graduates to create, design, plan, manage and direct all kinds of events, fulfilling corporate and institutional objectives, from the creation of a company or an event agency to business event departments/areas.

Learning center:School of Communication and Arts

Duration: 1 year. From October to July

Focused on the professionalization of the sector, providing added value to the future event organizer

The events sector has experienced a constant growth in recent years. Companies and institutions have encountered the need to connect with their target audience and improve their sense of loyalty towards the brand. Events have become the best way to reach that audience and a fundamental pillar for the commercial and business activity of companies.

Therefore, the demand for increasingly complete and prepared professionals has increased. The Master's Degree in Event Organization and Management of Nebrija University has been designed so that the student obtains an interdisciplinary profile with transversal training, based on subjects and activities that encourage the development of personal, professional, digital and linguistic skills.

Newlink Group already has over 120 professionals in its Madrid and Barcelona offices. The consulting firm, with headquarters in Miami (USA), has been present in Spain since April 2018 when it joined the Globally agency, with more than 20 years of experience in the lifestyle and B2C sector. Since its foundation, Newlink has had a dynamic track record helping to transform companies and organizations around the world through its various areas and programs: Lifestyle, Reputation Management and Public Affairs, Digital, Events, Tourism, Health and Well-being, Measurement & Insights, Organizational Transformation, Strategy, and Creativity and Branding.

The Master's Degree in Event Organization and Management is really focused on the professionalization of the sector, and delves into those subjects that will add value to the future event organizer. The curriculum has been prepared and endorsed by great professionals in the sector, and includes subjects such as:

The main objective of the master's degree is to facilitate the student's access to the labor market. Nebrija University has a collaboration agreement with over 60 companies, such as Equipo Singular, Globally, Walt Disney Company, Mediaset España, Avanza Comunicación, A3 Multimedia, among many others of reference in the Communication, PR and Events sector.

The area of events and the MICE sector moves in Spain over 7 billion euros, a figure that continues to grow, especially in cities such as Madrid and Barcelona, which host the most events and conferences in Spain. If we talk about the entertainment sector, which includes cultural, musical, sports, fashion and luxury, the numbers clearly raise students' opportunities as future event organizers and/or directors.

Our professors are professionals and are specialized in the events sector, they have extensive experience organizing and directing all kinds of events in reference companies and institutions such as Platea, the Palacio de la Prensa, Philips Theater of Madrid, or organizing festivals such as Inspirational of the IAB Spain association, among many others, that will provide the student a direct connection with the professional world.

Internships in the best companies and institutions in the sector

Expand your network of contacts by studying on an international campus which had over 56 nationalities during the 2018-2019 academic year, and is located in the center of Madrid.

The demand for professionals specialized in commercial and business activities at an international level is increasing.

With a modern curriculum, the student will be trained in all sectors that are commercially and legally involved in an international activity.

All our degrees and curricula have been prepared in accordance with the new guidelines set by current legislation, having already been verified by the National Agency for Quality Assessment.
The student must take 60 credits

The routes and requirements for entry into the degree are those set out in Royal Decree 1393/2007 of October 29, with subsequent modification in Royal Decree 861/2010, of July 2, which establishes the organization of official university education.

For its part, the entry profile for the Master's Degree in Event Organization and Management, both for classroom attendance and distance learning, is defined as follows:

Students who have an official Spanish university degree, or another degree issued by a higher education institution of the European Higher Education Area that grants access to Master's studies in the country issuing said degree. The entry profiles in this master's degree are those that correspond to the various Bachelor's and Undergraduate degrees in the branch of Social and Legal Sciences, specifically graduates in Communication, Advertising and PR, Audiovisual Communication, Corporate Communication, Protocol and Events, and Tourism. The University has a Promotion and Admissions Department, which is in charge of providing personalized information to those who request it, facilitating the access phases, and monitoring the candidate. This Department has specialized staff for each program, trained to respond to requests for information that may arrive by e-mail, telephone or fax, enabled for this purpose, and that appear in the university's brochures. The candidate is also given the opportunity to meet with the Coordinator of the Master's Degree in Event Organization and Management.

The candidate will have access to all the information about the admission process and access requirements on the University website, where he/she will have extensive and precise information on the Curriculum, the access requirements, the admission and enrollment process, the academic fees, the teaching staff and the research lines of the department.

Nebrija University has accessible information systems and procedures for the reception and orientation of new students to facilitate their incorporation into the corresponding university courses and, in the case of students with specific educational needs derived from disabilities, the University provides appropriate services for support and guidance, which will assess the need for possible curricular adaptations.

In order to develop a specific orientation procedure for new students that facilitates their incorporation into the University and to the degree, the Introduction and Adaptation Course to University is organized and held before classes begin, and introductory activities are organized. During these days, the newly admitted student is introduced to the structure of the University and the degree in which he/she has enrolled.

In general, the admission documentation will be submitted to the Admissions Department. The student must provide the originals or certified copies of the documentation submitted, within a period established by the University to formalize their enrollment. Any inaccuracy, falsity or omission of data, statement or document provided by the student in the period of admission, will determine the impossibility of continuing with him exercising the right from the moment the University has proof of those events, proceeding to the cancellation of the application for admission submitted and the place awarded, without prejudice to the criminal, civil or administrative responsibilities that may arise.

To access the official university master's degrees, it is necessary to submit the following documentation:

In the event that the studies used to access pre-registration to the Master's degree are completed in a Foreign Higher Education institution, both the degree and the academic record (grades) must be official and issued by the competent authorities, in accordance with the legal system of the country of origin.

If the number of applicants exceeds the number of places offered, the student's academic record (average grade) will be taken as admission criteria.

Once all places are full, in the case of having more people interested in accessing, these will remain on the waiting list in the case of possible open positions that may arise before the beginning of the academic year.

In addition to the evaluation of the academic merits provided by the candidate, students must take the following tests that are part of the admission process.

In order to know the student's real level of knowledge of the foreign language, the Institute of Modern Languages carries out a language positioning test. The level tests consist of a written exam with multiple-choice questions, oral and written comprehension, and use of the language. They are taken either in person or online.

It will not be necessary for the candidate to take the language positioning test if he or she delivers certification that proves the knowledge of a foreign or Spanish language at a B2 level of the CEFR. The accreditation of the level will be validated through the official degrees admitted by the table of certificates of ACLES and/or Instituto Cervantes. Valid for one year.

Conducted by the Director of the Program or by university advisors of the University, this interview is aimed at verifying the candidate's suitability and profile according to the degree. It is about determining if the candidate has sufficient motivation, training and knowledge, skills, aptitudes, communication skills, extracurricular activities and future interests necessary to be admitted as a student in the postgraduate courses of Nebrija University.

**For Spanish speakers, the personal interview will have a possible score of 100%.

The organization of events in Spain: Economic and social engine

If we talk about other events such as cultural, musical, sports, fashion and luxury, the numbers clearly raise the opportunities of students as future event organizers and/or directors.

Profiles that may develop their skills in the departments of Communication, Publicity, Public Relations, Protocol and Institutional Relations of official organizations, large, medium and small companies, and in Communication and Public Relations Agencies; Advertising Agencies and Event Agencies, among others.

Nebrija University has signed a Collaboration Agreement regarding training and employment internships with nearly 3,000 companies and institutions, in order to promote the practical training of all its students and the approach to the professional environment and first employment of university graduates.

News in Event Organization and Management

A center that applies the “learning by doing” philosophy, where one practices the profession by exercising it. Our students work in the organization of events such as the Youths Touched by Advertising Festival and the AdN Short Film Festival.