We are pioneers. One of the first International Relations programs in Spain
Conference by Mathew Levin, Canada's ambassador to Spain 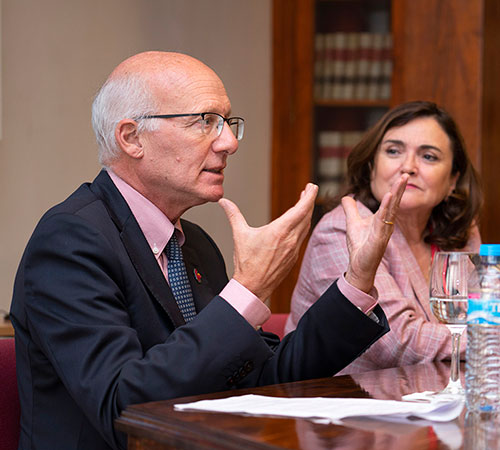 Admission profile:Students who want to dedicate themselves professionally to the international world, as they will be prepared to work in the Foreign Service of the State, International Organizations, International Cooperation, agencies and transnational companies.

Those interested in studying for and obtaining the diploma of Bachelor's Degree in International Relations from the Antonio de Nebrija University must be candidates with a great interest in the international reality, considering it to be essential in the development of society, and have an interest in social issues and policies, interest and respect for other cultures, dynamism and adaptability, and open mind, a restless and proactive spirit, intellectual curiosity for the acquisition of new knowledge, independent but at the same time capable of working in a team, communication skills, respect for Human Rights and equality between people.

Academic year in which it was implemented: 2010

Languages: This degree is taught in Spanish. Most of the Bachelor's subjects are also offered in English, this will lead to obtaining an accrediting Diploma. English level required at admission: A2. Level of English for the bilingual modality: B2

Study in a multicultural environment with students from over 50 countries

A magnificent choice for all those students with a strong international vocation. Future graduates will be able to expand their professional profiles, combining their degree with the Bachelor's Degree in Law, Journalism, Tourism, C-ADE or Corporate Communication, Protocol and Event Organization.

In addition, the Bachelor's Degree in International Relations from Nebrija University has academic extension activities of a high educational level, connecting students with different areas of reality and the international environment (conferences, seminars, visits, study trip to Brussels).

Our Undergraduate Degree in International Relations seeks a balance between the acquisition of knowledge and the development of skills; our main objective is to train professionals with a solid scientific base, with a marked interdisciplinary character and capable of performing tasks in administration, management, advice, coordination, analysis, evaluation, problem solving or dissemination of projects in the field of international relations, whether in the public or private sector.

Professional internships are a fundamental element of our students' education and are compulsory. Students will be immersed into the working world in different organizations and international institutions, both governmental and non-governmental, in multinational companies and international agencies.

At our University we give the utmost importance to the knowledge of the English language and other foreign languages. Students can take the International Relations degree in bilingual mode if their level of English is adequate.

Possibility to take 80% of the program in English

The training process is not limited to classrooms. The curriculum covers different activities such as conferences, visits and workshops. Students will be able to travel to Brussels to see the institutions of the European Union in person, visit the Congress of Deputies and CESEDEN (Center for Security and Defense Studies).

BOE Num. 68, of March 21, 2011
Our curriculum has been prepared according to the new guidelines set by current legislation, and is verified by the National Agency for Quality Assessment and Accreditation.
The student must complete 240 credits

Expand information about this subjects

The recognition of 6 credits will be managed according to the different activities that the student carries out throughout his/her degree. They will be awarded for cultural activities, sports, student representation, solidarity and cooperation, or for attending one of the following subjects: Human Rights, Ethics of Volunteering and Corporate Social Responsibility.

Evaluation of the Development of Activities in the Company 18 ECTS

Program whose objective is to favor the practical education of the students, under the continuous supervision of the University's Department of Professional Careers, the academic department corresponding to the degree and the company or collaborating institution where the internships are carried out. We provide guidance on the choice of internships and follow-up and tutoring, always taking into account the professional orientation of each student.

This project involves the student carrying out research tasks in different subjects with the advice of one or several professors of the Department and, occasionally, professionals from the business world. For this, the student has the possibility to choose a project from among those offered.

The Antonio de Nebrija University, in addition to meeting the requirements for accessing undergraduate studies in accordance with current legislation, requires passing its own admission tests, both for undergraduate and postgraduate degrees.

1. Access to Spanish universities, both public and private, to study the teachings that lead to obtaining different official university Bachelor's Degrees valid throughout the national territory, will require, in general, passing the exam referred to in Article 38 of Organic Law 2/2006, of May 3, on Education, which is regulated by this royal decree, regardless of the other cases provided for in Article 3 of this royal decree.

Starting in the 2017/2018 academic year, all students who meet the legally established access requirements will be able to access Bachelor's degree studies after passing the University's own entrance tests. Students who are in any of the following academic situations may apply for admission to the first year of a degree:

The Admissions and Promotion Department will confirm to the candidate that it received the printed or online application and will call them for the admission tests. On the day of the test, the candidate must submit, if he/she has not done so in advance, the following documentation:

All students who wish to take their university degree at the Antonio de Nebrija University must pass an admission process consisting of:

The Academic Coordinator of the Bachelor's Degree in International Relations will prepare the admission test. It consists of ten questions and solving a practical case on a current national or international issue. In this configuration, it is essential to keep in mind all the national and international legal and economic news in order to reflect them in the test, as well as knowing the interests and expectations of future students.

The test periods are as follows:

These tests can be taken in Madrid or in the various provinces. In general, these tests are taken in person.

In Madrid, the tests are taken at La Berzosa Campus and the Dehesa de la Villa Campus. The schedule is set as follows:

Candidates can take the tests on both campuses interchangeably, regardless of where the degree for which they are applying is taught.

In provinces other than Madrid, the Promotion and Admissions Department travels to the cities in which the department has previously carried out, throughout the academic year, counseling sessions regarding Nebrija in different Secondary Education Centers. These Admission Tests consist of a first round in the early call and a second round in the ordinary call, and since they are taken in person, the identity of the candidate must be proved by presenting their ID. These tests are accompanied by an Information Session for parents, which is conducted by one of the academic advisors of the Department.

All the documents submitted by the student, together with the results of the Admission Tests, are evaluated by the Admissions Commission, made up of the Director of the Promotion and Admissions department, the Director of the Registrar's Office and the Coordinator of the degree. In said Commission, they assess whether the documents are administratively correct and whether the candidate's profile conforms to the degree's admission profile.

In addition to meeting the established access criteria, the Admissions Commission will accept or not accept the admission of a student taking into account the aforementioned admission criteria.

At the beginning of each academic year, the academic coordinators are in charge of updating the specific tests of each degree in order to guarantee that the interested candidates fit the profile. The results of the admission tests are communicated in writing and/or by telephone to each candidate within a period of approximately 3 to 5 days.

Once the candidates' admission has been communicated, they must reserve their place. This economic pre-enrollment guarantees the candidate's place at the University.

Pre-enrolled candidates who wish to formalize their academic enrollment at the University must, within the indicated deadlines, follow these steps:

The International Mobility Office of Nebrija University makes a constant effort to monitor the agreements with the most prestigious universities.

Students may study an annual or semi-annual period at universities in the European Union, America, Asia and Australia. This option will expand their vision of the world as well as their linguistic education, and will prepare them to rigorously perform them professional work in any corner of the world. Some of the Universities with which we have established agreements are:

Our Undergraduate Degree in International Relations takes into account the professional interest in itself and the growing demand of people trained in this field. The future graduates will be able to identify themselves fundamentally with the following professional profiles:

From this, Nebrija is positioned as a reference academic model, by educating students with excellent individual behavior, interaction with their environment and motivated by and for constant and continuous education. The Nebrija Institute of Professional Skills works every day to achieve the differentiation of our students through the development of attitudes and aptitudes.

With all this, the University puts at your disposal a total of three subjects through which the student will acquire the knowledge and skills necessary to become a competent professional within the demands of the current labor market.

There are three blocks 6 ECTS credits each:

The main objective is that students obtain the best out of themselves through the development and empowerment of their personal skills and resources, through personal self-knowledge.

In addition, some of the professional skills that are worked within the three seminars are those related to interpersonal skills and active communication and negotiation skills, essential for our students to know how to convey ideas, argue, give information and opinions in an appropriate, clear and convincing way.

Other aspects such as team work, conflict resolution and project management capacity are dealt with within what will be their work performance.

In the third block, skills aimed at increasing the employability of the student are worked on. It includes working with tools and techniques for job search, and performing tasks that achieve a greater use of personal skills in the student.

In this way, and in a complementary way to their specific education, we help students create a differentiating pattern in the social and business environment in which they will be immersed when they finish their studies.

Nebrija University's Bachelor's Degree in International Relations, one of the first programs in Spain in this field, aims to train students and prepare them for the professional environment, so they are able to understand international affairs from a historical, political, economic, cultural, legal, sociological and communication perspective.