In collaboration with Antena 3, of the Atresmedia multimedia group
Vicente Vallés - Visit the set of Nebrija Television 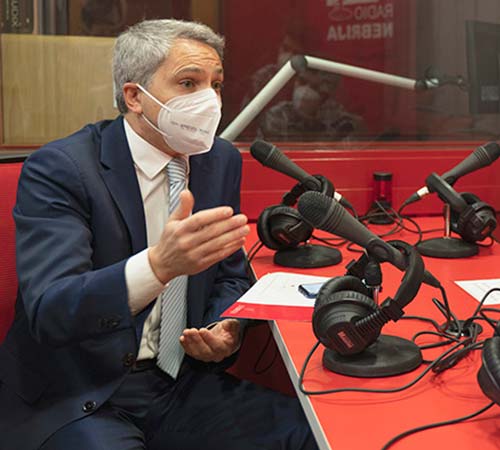 Student profile:The University Master's Degree in Journalism in Television is aimed at those who want to develop a career as journalists specialized in television, planning and making audiovisual news. To be admitted to the program, it is necessary to be in possession of a higher university degree such as undergraduate, bachelor, higher engineering, or equivalent. Our students come from undergraduate degrees in Journalism (70%), Audiovisual Communication, Advertising and Public Relations, Business Administration and Management and Sociology, among others.

Graduate profile: Our students are perfectly prepared to work in the different profiles demanded by television information companies. They are journalists trained in the areas of production, direction, filming, editing, reporting and presentation before the camera.

Duration: 1 year. From October to June

Program and methodology based on the learning by doing model

The University Master's Degree in Journalism in Television is aimed at those who want to develop a career as journalists specialized in television, planning and making audiovisual news.

You will have at your disposal an important network of contacts with various communication groups, media and news agencies, where you can develop as a television presenter and editor, reporter, correspondent or expert in production, directing, camera and staging.

According to the General Media Study, television consumption in Spain has grown four points last year, reaching a penetration of 89.1%. Society consumes more and more audiovisual products, among which informative contents stand out.

The Master's degree in Journalism in Television trains audiovisual information professionals capable of practicing journalism in informative programs of all types or formats, broadcasted by general televisions, specialized channels, the Internet and for all kinds of devices.

If you want to learn how audiovisual information pieces are prepared and elaborated, master the management phases of the news from obtaining the information to broadcasting it, through the recording of images and the digital edition; if you are interested in training in the most demanded journalistic specializations by the current market such as sports journalism, international, economic and fashion - society, this is your Master's degree.

The collaboration with Antena 3 Televisión and the Atresmedia group creates a training that is very close to the professional world and the needs of the area. The Master's degree has a faculty of professors formed by professionals of great prestige in all branches of journalism, including the use of facilities and materials of the channel and facilitates the completion of internships at the end of studies.

In addition to Antena 3, the main television channels have hired the graduates of the Master's Degree in Journalism in Television: Televisión Española, Cuatro, Telecinco, and La Sexta.

The teaching methodology is absolutely practical. The program is carried out through workshops, live sessions, news recording and reports in the street. We mainly work with materials generated by the students themselves and with materials from Antena 3 broadcasts that are used for the analysis and simulation of filming situations.

Atresmedia, sponsor of the Master's degree, is the main communication group in Spain after its merger with La Sexta. The group owns television channels such as Antena3, Neox, Nova, La Sexta; radio stations such as Onda Cero, Europa FM and Onda Melodía. The group includes Atresplayer, Atremedia Conecta, Nubeox and ¡Hola!TV, among others.

Practical training from the first day

Hand in hand with the best

Visiting teachers and first-class master lectures: Hilario Pino, José María García, Javier Álvarez, Jon Sistiaga, Jesús Álvarez, Marta Fernández and Ángel Sastre are some of the professionals who have visited our classrooms and talked with our students, sharing their experiences.

The students of the Master's degree have at their disposal an Internet television called Nebrija TV Channel where, on a voluntary basis, they can make news, reports, magazine programs... to develop the skills needed by a television journalist.

Our teachers are active professionals. Your experience represents a very valuable bonus for student learning.

BOE No. 184, of August 2, 2011
All our degrees and curricula have been prepared in accordance with the new guidelines set by current legislation, having already been verified by the National Agency for Quality Assessment.
The student must take 60 credits

The projects are directed by professionals who have a long career in the field of informative production and direction on television:

The teaching staff of the School of Communication and Arts is made up of professionals from each field of specialization, who develop a teaching method based on the conviction that what we learn, we learn by doing it.

Integration with the profession is based on the incorporation of professionals as associate professors supporting each program, in a teaching methodology inspired by the learning by doing proposal that involves the experiential aspect in the classrooms and in academic extension activities.

The University Master's Degree in Journalism in Television - Antena 3 has a close relationship with the partner, which extends to all areas, from the teaching staff to the internship program.

The Master's Degree in Journalism in Television trains professionals whose future work will be:

Nebrija University has signed a Collaboration Agreement on training and employment internships with nearly 3,000 companies and institutions, to promote the practical training of all its students and the approach to the professional environment and first job of university graduates.

These are some of the companies that can be chosen by the students of the Master's Degree in Journalism in Television, in order to carry out their internships and enter fully into contact with the professional field, related to television journalism:

Now in Journalism in Television

Jon Sistiaga in the "Journalists Nebrija" series
This is a Speech class
Meeting Susana Griso
What is a fashion journalism exam like?