Master's Degree in Direction and Production of Fiction Series Atreseries

Along with Atreseries, which belongs to the leading entertainment group in Spain
Web series frame of No me cargues el muerto, filmed at Nebrija University 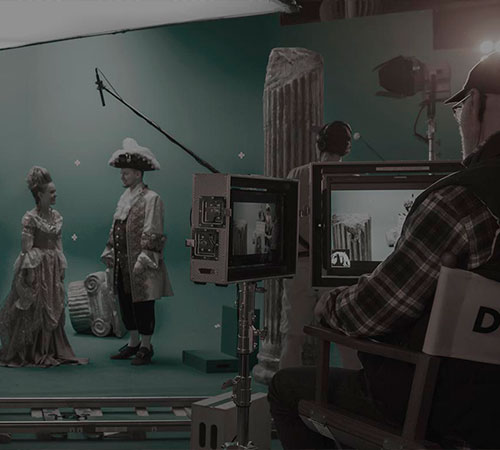 Master's Degree in Direction and Production of Fiction Series Atreseries

Student profile: The Master's Degree in Direction and Production of Fiction Series is aimed at those who wish to develop a professional career planning and producing audiovisual entertainment products such as sitcoms, tv-movies or any other serial fiction format. In order to be admitted to the Master's degree, it is necessary to have an undergraduate degree, bachelor's degree, or equivalent. Our students normally come from the Undergraduate/Bachelor's degrees in Audiovisual Communication (70%), Journalism, Advertising and Public Relations, Fine Arts and Dramaturgy, among others.

Graduate profile: Professionals capable of planning, directing and producing fiction series episodes for broadcasting on television or other platforms. The Master's degree also prepares the student for the criticism and evaluation of projects of audiovisual entertainment narrative pieces; it creates profiles with a critical spirit, a solid academic background and the necessary skills of the double aspects of audiovisual production and critique.

Duration: From October to June

Program that combines the aspects of directing and producing fiction series, from the analysis and elaboration of scripts, to staging and postproduction of the recorded material, technical planning, work with the actors, the adaptation of sets, filming techniques, work of team members and the use of soundtracks.

Television series are the most consumed television entertainment product in recent years. Series such as Game of Thrones, Ministerio del Tiempo, Mad Men and Money Heist are followed by millions of spectators. Some of the professions that are needed for its implementation are: director, producer, screenwriter, editor and copywriter.

The teaching methodology is practical. It works primarily with materials filmed by the students themselves and with materials from fiction series and other film production companies, which are used for the analysis and simulation of film planning situations.

Students work with the material and technological resources available in the School of Communication and Arts (digital cameras, lighting and sound equipment and post-production rooms, among others). Occasionally, university extension activities take place at specialized companies.

The collaboration with film production companies such as Atresmedia, Movistar +, Boomerang, Bambú, Cristal Forest, Miramón Mendi, Plano a Plano generates numerous opportunities, such as having a faculty of professionals of great prestige in all specialties, the use of facilities and materials of the film company and its collaborating companies, the facilitation of carrying out internships at the end of the studies and the continuous updating of the contents of the program.

The students of the Master's degree design, plan and produce a fiction web-series that is hosted on Nebrija TV Channel, the University's Internet television portal, and is published in DVD format.

The Master's Final Research Project consists in the simulation of defending a proposal (pitch) of a fiction series before a tribunal formed by professors of the Master's degree. This proposal must include all the documentation that is used in the professional world (bible, script, camera positions), together with a pilot episode filmed and edited as a spin-off of an existing series.

Study at an international urban campus in the center of Madrid

Teaching team formed by professionals with recognized experience in this field, such as David Molina, director of over one hundred episodes of television fiction in series such as Periodistas, Vis a Vis, Olmos y Robles and Estoy vivo, and Javier Naya, screenwriter and series script coordinator of Centro Médico and screenwriter of Periodistas, Rabia and El Barco.

The students of the Master's degree have at their disposal an internet television called Nebrija TV Channel, where they can voluntarily create their own audiovisual content to develop the skills that every professional needs.

The program is the only Master's degree in Spain with this specialty, and is among the 5 best postgraduates in the audiovisual sector of the El Mundo newspaper ranking.

BOE No.184, of August 2, 2011
All our degrees and curricula have been prepared in accordance with the new guidelines set by current legislation, having already been verified by the National Agency for Quality Assessment.
The student must take 60 credits

The works are directed by professionals who have a long career in the direction and production of fiction series:

The faculty of the School of Communication and Arts is made up of professionals from each field of specialization, who carry out a teaching method based on the conviction that what we learn, we learn by doing it.

The integration with the profession is based on the incorporation of professionals as associate professors who endorse each program, in a teaching methodology inspired by the learning by doing proposal that affects the experiential aspect in the classrooms and in the academic extension activities.

The Master's Degree in Direction and Production of Fiction Series - Atresmedia has a close relationship with the partner, which extends to all areas, from professors to the internship program.

The Master's Degree in Direction and Production of Fiction Series trains professionals whose future work will be as:

Nebrija University has signed a Collaboration Agreement regarding training and employment internships with nearly 3,000 companies and institutions, to promote the practical training of all its students and their introduction to the professional environment and first employment as university graduates.

These are some of the companies that students of the Master's Degree in Direction and Production of Fiction Series can choose in order to carry out their internships and come into contact with the professional field, related to audiovisual direction and production:

More information about Internships in Companies

Now in Direction and Production of Fiction Series

The filmmaker Rodrigo Sorogoyen visits the School of Communication Sciences and Arts of Nebrija University, sharing his experiences with students and professors.