Specialized program in language development and its possible alterations 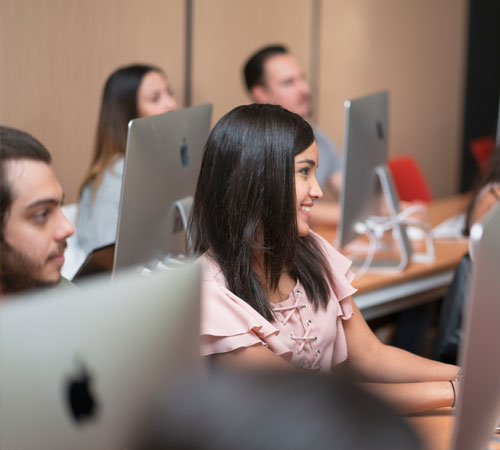 Those interested in studying and obtaining the University Master's Degree in Language Development and Communication Difficulties from the Antonio de Nebrija University must comply with the requirements established by current legislation, with the admission profile being that of a university graduate or equivalent (bachelor, associate or master's) of degrees in the educational field: Early Childhood or Primary Education, or Pedagogy, or Psychopedagogy. Likewise, given the multidisciplinary nature of the program, those students who have completed the Master's Degree in Teacher Training for Compulsory Secondary Education and Baccalaureate, VT and Language Teaching, or the Teaching Aptitude Certificate (CAP) will be able to access the Master's degree.

The objective of the program is academic specialization in relation to the assessment, analysis, detection and its application to the intervention of the latest scientific advances in relation to the development of language and its possible alterations. It will provide graduates with sufficient competences for the analysis of linguistic, oral and written skills, and the processes involved in them, as well as to interpret the process of development and learning of speech, language and communication. Lastly, graduates will be able to integrate this knowledge, and design research in the area.

Center responsible:School of Languages and Education

This Master's degree directly poses the scientific basis of language in comparison with the current epistemological criterion of science, especially in the field of humanities

The Master's Degree in Language Development and Communication Difficulties of Nebrija University entails an academic and study specialization regarding research in the assessment, analysis, detection and application for intervention of language development and its possible alterations. The proposal revolves around three axes: the analysis of linguistic, oral and written skills, the process of development and learning of speech, language and communication, and lastly, the examination of the latest scientific contributions, primarily from the area of neurosciences, in relation to its influence in stimulating language development and intervening in communication disorders.

This degree arises from the need to harmonize the contributions made by different fields of work (speech therapy, psychology, pedagogy, medicine, education, etc.), with the ultimate aim of offering an adequate multidimensional response, which combines the most relevant contributions observed in the area and offering a coordinated response, based on scientific knowledge, to the diversity found in the population that presents difficulties in the acquisition and correct development of speech, language and communication.

Likewise, we can say that it also emerges due to the need to promote cohesion and social inclusion of people with different profiles who will require personalized and sustained support during their learning process (OECD, 2016), which requires the collaborative work of different professionals involved in the management of attention to diversity.

The growing interest of recent years in the study of individual differences in the population also proves the interest in the program. It pays attention not only to the most vulnerable populations, but also to the differences found in the bulk of the population, situated within the plane of normality, which on many occasions needs personalized attention for the development and improvement of their language skills. From this point of view, we understand diversity as the heterogeneity or differences found in the general population regarding their intellectual capacity, interests, learning rhythms, socio-cultural differences, gender or linguistic differences. As Cecilia Rojas Nieto and Elsa Viviana Oropeza Gracia (2018) point out, we are going to find individual differences from the early development of vocabulary to the use of the most complex linguistic skills.

The 2030 Agenda for Sustainable Development proposes different lines of action to promote respect for the use of the mother language in teaching and learning, and the promotion and preservation of linguistic diversity; therefore, in 2016 International Mother Language Day focused on the relationship of the language of instruction with quality education and learning outcomes. In this sense, the Association for the Teaching of Spanish as a Foreign Language (ASELE) also points out the need to renew the methods of teaching Spanish as a mother language, to adapt them to the characteristics of society, as pointed out by Espinosa Ochoa and Orozco Arreola (2018), to which we can add the impoverishment of the use of the language, which was denounced by the Association of Spanish Language Academies (ASALE).

The objective of the internships is for the student to have contact with real cases and be able to observe and implement the knowledge acquired in the other Master's degree subjects.

The lessons are taught 100% remotely in the online modality, which allows you to combine your studies with your professional and personal life.

The teaching staff is made up of active doctors and professionals with a long professional career, both in teaching and research.

All our degrees and curricula have been prepared in accordance with the new guidelines set by current legislation, having already been verified by the National Agency for Quality Assessment.
he student must take 60 credits

On the other hand, students will have to obtain the following general competences:

Specific competences that all students will acquire

At the end of their studies, students must have acquired the following Specific Competences:

Nebrija University's commitment to academic rigor, training in leading companies and institutions, innovation in multidisciplinary programs and international projection, places the University in the top positions of the most important rankings.

The QS Stars International Ranking grants Nebrija University the highest score in quality and satisfaction of students regarding teaching, employability of graduates and the internationalization of the institution.

The national rankings also recognize Nebrija University as the second Spanish university in teaching, highlighting its performance in research, knowledge transfer and internationalization.

Program that directly outlines the scientific basis of language in comparison with the current epistemological criterion of science, especially in the field of the humanities.

At Nebrija University we are starting the new year with the same enthusiasm and energy as we always do. We are prepared to offer the student an educational experience with the highest academic rigorousness, which is characteristic of our institution. Welcome to the Nebrija family!